Samantha Smith (1972-1985) was known as “America’s young ambassador for goodwill” for bridging the two sides of the Cold War through her 1982 letter to then-Soviet leader Yuri Andropov (1914-1984) where she asked him whether his country would launch a nuclear war, his April 1983 reply assuring her that the country would not and inviting her to come to the Soviet Union to “see for [herself that] in the Soviet Union, everyone is for peace and friendship among peoples,” which she and her family accepted and undertook in July 1983.

The previous retrospectives about Samantha have been heavy and serious. So, on the occasion of her birth month, I decided to write something less heavy-handed: a compilation of trivial questions that I would have asked her. By trivial, I mean the really pointless questions that don’t have anything to do with her exercise in children’s diplomacy.

Disclaimer: This is my attempt to make a meme out of a 13-year-old who died 30 years ago. My apologies. (Russians have been doing the same thing for some time now though.)

1) Were you ambidextrous or were you only left-handed? What issues did you encounter because of being left-handed?

2) What inspired you to get a new hairstyle by the summer of 1985? (What do you call that anyway?)

It’s not bad though, compared to these (Source video – Lime Street).

3) What did you think of New Coke?

Inspired by this picture (Source, in turn from this)

4) What game did you have in your Game & Watch?

5) What music did you listen to? 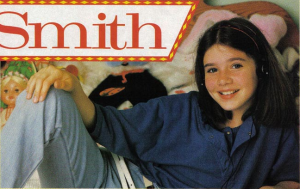 Did you hear “You Spin Me Round (Like a Record)” or “Take On Me” while you were in London? (They were released earlier in the UK than in the US, where they ranked high in the Billboard Hot 100 after August). If yes, did you like them (cause I do)? (Source of picture)

– In this comment, Victor Matrosov stated that Samantha was not Catholic.

7) Had you considered going to space?

Did that thought come to you after meeting the first woman in space and the first American to orbit the earth/oldest person in space? (Source of images: left, right)

8) Why did Andropov’s copy of your letter differ from the version published in your book Journey to the Soviet Union?

Left: Samantha’s letter from the Russian Federal Archive Agency, image released last year with Andropov’s other papers (Source, in turn from this) Right: As it appears in Journey to the Soviet Union

All posts in this site are not meant to be legal advice and are written by a law student. Please use your discretion accordingly. Thank you.