Updated 3 February 2020, with additional information and minor corrections, all in bold.

Samantha Smith (1972-1985) was known as “America’s young ambassador for goodwill” for bridging the two sides of the Cold War through her 1982 letter to then-Soviet leader Yuri Andropov (1914-1984) where she asked him whether his country would launch a nuclear war, his April 1983 reply assuring her that the country would not and inviting her to come to the Soviet Union to “see for [herself that] in the Soviet Union, everyone is for peace and friendship among peoples,” which she and her family accepted and undertook in July 1983. This post is the fourth in a series of retrospectives, which will run until August 2015, the 30th anniversary of her death, along with her father Arthur and six others, in a plane crash in August 1985.

This article from the Maine-based Bangor Daily News dated August 21, 1985 is currently the last that appeared before Samantha’s death (Source) . The two pictures of Samantha shows how much she had aged in only two years. Either that or she opted for a more mature look thanks to Hollywood. Lastly, Lime Street was not a sitcom.

Samantha began appearing in American television soon after the Soviet Communist newspaper Pravda published her letter in April 1983. She was interviewed on Nightline, CBS Morning News, The Today Show (source), and the The Tonight Show Starring Johnny Carson (video here, courtesy of SamanthaSmithINFO). She also appeared on a Disney Channel special where she interviewed candidates aspiring for the Democratic Party nomination for the 1984 US presidential election. However, this stint drained her interest in journalism, so she turned to other things instead, including acting (Source, page 22). She made her acting debut as a minor character in Charles in Charge in the fall of 1984. But the opportunity to make an acting breakthrough came to her on 1985, when she was cast in a lead role in Lime Street, a show about “a globe-trotting insurance investigator who spends as much time with his family in Virginia as he does on glamorous cases” (Source: Diana Maychick and L. Avon Borgo, Heart to Heart With Robert Wagner [1986]).

According to producer Harry Thomason, “The time was right for a single-father show. And R.J. (Robert Wagner) was, of course, a single parent himself. From the moment the pilot script got the okay from ABC, our main concern was casting. And casting R.J.’s two daughters was one of our most difficult tasks. We wanted natural actors, not robot kids.” (Source: Diana Maychick and L. Avon Borgo, Heart to Heart With Robert Wagner [1986]).

Wikipedia notes that there are two versions how Samantha was cast into Lime Street:

[One] story states that she had caught the attention of [Linda] Bloodworth-Thomason in early 1985 when the latter’s brother-in-law spotted her on a talk show and suggested that she might fit the role of the elder daughter in the series, at that time known as J.G. Culver (People, 3 June 1985). Another suggests that [Robert] Wagner, who had first seen her on The Tonight Show, called her up, asking her to audition for the role (People, 9 September 1985).

Douglas Snauffer’s The Show Must Go On cites an account by executive producer Harry Thomason, which differs from those earlier cited but seems to merge them together:

My brother…saw Samantha on the central time-zone airing of The Tonight Show and knew we were casting. He called us in California and said, “Here’s a little girl you should look at.” So we watched her that night on The Tonight Show and were very impressed. We then flew Samantha out and auditioned her. We thought she was wonderful, and ABC agreed, so we put her in the show (p. 143).

An episode of Evening Magazine states that the role was written with Samantha in mind (see video here).

Finally, Samantha had her own account on how she landed the role. Peter Jackson of the Associated Press wrote on August 1985:

Samantha said she tried out for the part at the invitation of the show’s writer, Linda Bloodworth-Thomason, who had seen Samantha on the “Today” show. “I thought I did really terrible,” she said of the tryout. “I was almost in tears. When Linda came over though, she told me that I had the series.”

Samantha’s father Arthur told Time in March 1985 that he approved of the role after meeting Wagner and finding him to be a pleasant low-key family man. In August 1985 (shortly before her death), Samantha said that “Wagner was lots of fun to be with. It’s easier to work with someone who knows what he’s doing. He was really like my own father. He helped me and Maia [Brewton, who played the younger daughter,] out a lot, giving up tips on acting. He’s a sweet man, great with kids.”

Samantha played the role of Elizabeth Culver, the elder daughter of J.G. Culver, played by Wagner. Linda Bloodworth-Thomason, the show’s co-producer and writer, described Elizabeth as “an old-fashioned kind of girl, nothing Cyndi Lauperish, who is polite, well-read and aware of something in the world besides MTV.” The pilot was filmed in March 1985. When asked by Gale Warner, author of Citizen Diplomats (p. 22), whether she wanted it to become a series, she replied “Yeah, I really like California.” Her father Arthur said that Los Angeles was not what people expected it to be, “Everyone we met there was very down-to-earth, very reasonable, very real.” ABC eventually picked up the show for its fall 1985 season. Speaking to Bangor Daily News shortly before she died, Samantha described being in Hollywood as “great fun. It’s easy to get around. You can walk everywhere.”

Lime Street was shot on location in Virginia and in London. The latter allowed Samantha to appear in BBC’s Breakfast Time to promote Lime Street (User newdonia‘s “About Me” on YouTube, which has disappeared since the latest YouTube redesign, recalls this guesting). She had been in London with her father for eight days before going home to Maine on August 25, 1985.

Everyone who was part of the show were all praises for Samantha’s performance (her parts may be viewed here). A People magazine article from May 1985 goes:

The two-hour pilot has already been shot, and cast and crew alike were bowled over by Smith’s charm. Predicts the show’s co-producer and writer, Linda Bloodworth, “I think she’s going to be President in a couple of minutes.”

After Samantha’s death, Linda Bloodworth-Thomason said that while she had her doubts when Wagner asked Samantha to audition for the role, she “immediately fell in love with her [upon speaking to her]. She told me that her dog had just had puppies and she didn’t know if she would come out. That was exactly what we wanted, that kind of quality.” 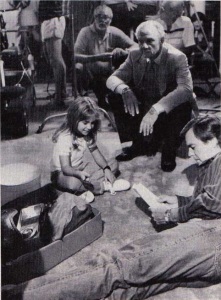 Speaking to The Daily Mail, Wagner said, “Samantha was a special girl. We fell in love with her the first time she walked on the set.” (According to an article from the magazine GQ in March 1986, “Wagner was adamant [regarding the debate whether or not to replace Samantha]; you don’t replace people he told network executives.) Actor John Standing said that she was the most enchanting sweet girl and had great potential as an actress. Thomason likewise said that she was destined to be a major talent.

Those who have seen the show also gave positive comments about Samantha’s foray into acting. Wikipedia quotes John Leonard of the magazine New York, “…Samantha was wonderful – gawky but sincere, life-loving, a saint with bangs….” Reviewing the series 20 years after it aired, F Gwynplaine MacIntyre from the Internet Movie Database said, “The ensuing publicity got her cast in ‘Lime Street’, but it was no stunt casting: she shows real talent and presence here, as well as being photogenic, and could have had an impressive acting career.”

However, like its fallen star, Lime Street had its critics. The title of the review by Bill Kelley of Sun-Sentinel from September 20, 1985 was “Originality Not Found On ‘Lime Street’.” Kelley goes on:

Each season, the networks try to satisfy this audience with new shows that can sarcastically be described as “the same, but different“ — familiar enough not to send shock waves through Middle America but not so trite that viewers will mistake them for a 5-year-old, syndicated rerun. The leader in delivering such shows is ABC; one of the masters at starring in them is Robert Wagner.

Apart from the fact that the pilot devotes a large volume of boring time to depicting Wagner`s J.G. Culver character as a doting father, there is virtually nothing to separate Lime Street from such Wagner series as It Takes a Thief, Switch or Hart to Hart. He`s still a devilish rascal with a sly grin . . . and a firm moral code. The series pins its hopes squarely on the TV audience`s fondness for the Wagner they have come to know over the years, rather than on plot turns or originality (Source).

Suffering from an unattractive Saturday night time slot, Lime Street also suffered a beating from NBC’s The Golden Girls, which started airing a week earlier (and in 1987, would have an episode inspired by Samantha’s letter to Andropov). By November 1985, Lime Street‘s producers pulled the show from ABC, hoping that the network would give it “a more favorable time slot on a different day” (People, November 1985). Alas, this was not meant to be. According to an article from GQ in March 1986:

Late in the fall, ABC was taken over by Capital Cities Communications, and Brandon Stoddard replaced Lew Erlicht as entertainment president. Wagner was optimistic, since he was indeed much closer to Stoddaid than to Erlicht, the man who had yanked Hart to Hart [Wagner’s last series with ABC before Lime Street, running from 1979-1985] off the air. Yet there is an article of faith in Hollywood among network presidents: Thou shalt not pursue thy predecessor’s troubles. Stoddard had some misgivings about the show and didn’t feel he could offer Wagner a plummy time slot. Still, out of respect for Wagner’s performances he left the final decision up to R. J. Wagner, who, shrewd enough to know when to fold his cards, did so. As Wagner sums up, “It would be like playing, out of town over and over again.”

I recommend the GQ magazine article cited above and Douglas Snauffer’s The Show Must Go On for more information about the production of Lime Street.

I also recommend reading Chapter 25: Getting By of Diana Maychick and L. Avon Borgo’s book Heart to Heart With Robert Wagner, from 1986, and Eileen Prose’s interview with Robert Wagner which sheds light on how Robert Wagner mourned Samantha’s death.

I may comment on the only available episode from Lime Street, “The Mystery of Flight 401”, for my YouTube review show.

All other episodes remain lost media.

I have read from a YouTube comment by tracy80sgirl that Wagner does not want it released on DVD. After reading about the show’s misfortunes, I think I understand why.

All posts in this site are not meant to be legal advice and are written by a law student. Please use your discretion accordingly. Thank you.